Forget the planetary day and hour, tonight was all about the Moon. I did my work, did you do yours? 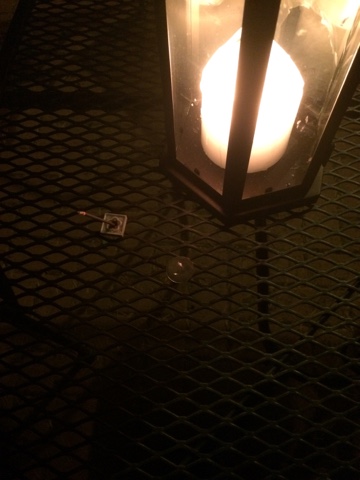 
Today I drew Frucissiere's sigil on the sidewalk at a crossroads near my house. I drew it as a base on which to leave a thanks offering for the instructions I've received.
I've been curious about bone divination. In the Grimorium Verum Frucissiere's powers are listed as:

“Frucissière, called also Frulhel or Frastiel, can bring you anyone you want whether dead or alive. Said also: revives the dead. Also said: he has the powers of infernal necromancy by the divination of dry bones.”

The Divination of dry bones.  I have been working with Frucissiere to learn divination by bones. I have received my first lessons. I have started collecting bones. I have been doing research. More to follow.
Posted by J at 9:55 PM No comments:

Posted by moonlit hermit at 9:06 PM No comments:

I Am Not A Demonolator

Up until just a few days ago I had no real idea what Demonolatry actually was. I tended to shy away from any reference to Demonolatry that I would come across on the interwebs in the course of researching spirits. But as I dig deeper and deeper into the spirits of the Grimorium Verum it seemed to me a question that I needed to answer for my own peace of mind. If I were to work with the grimoiric spirits in a meditative way without the prescribed ritual restraints of the classic grimoires does that make me a demonolator?
As I saw it the first step was to find out from demonolators what Demonolatry was. I purchased "The Complete Book of Deomonolatry" and "Demonolatry Goetia" both by S. Connolly and "Goetic Demonolatry" by Ellen Purswell. In the past few days I have started, but not finished, all three books. I have read the most of the "Complete Book" because it has the most basic information.
While I do think there are some methods and philosophies that can be helpful in spirit relationships I can say with some confidence that there is enough of a difference in philosophy that I do not count myself among them.
One of the things I discovered in my research is that Demonolatry is not quite as immature as I had perceived. It had, up to this point, struck me as a thing rebellious kids did to be edgy and to frighten the grandparents. This is also kind of how I perceive the Juggalo fans of the band The Insane Clown Posse. There is, however, a certain amount of self-consciousness about Demonolatry; a feeling that they must fight for their own legitimacy. Though perhaps I'm picking this up from the writing style of S. Connolly and members may or may not feel this way. It seems to be the awkwardness of newness. While there are accounts of a "lineage" going back hundreds of years the movement really started with the Internet Age and so is barely twenty years old yet, still infancy in religious terms.
Respectful treatment of the spirits as ancient and powerful is a theme that I can definitely get behind. In fact it was taking this tone with these spirits that brought the question up in the first place. There is much, however, on which we differ. Here are a few highlights.
First and foremost is the concept of God. In Demonolatry it is the demons and specifically Satan that is considered the highest power. I will probably get into another post about my concept of God but suffice to say now that it is not Satan. Nor do I feel the need to attach such a culturally laden label to my ideas about God.
Secondly the information about correspondences attributed to each of the demons (Enns, elemental, and astrological attributions) strike me as someone's personal gnosis that the whole group is running with. The Enns in particular strike me as something I could come up with and my own invention would suit me better than what is published.
Third, the spiritual focus is very narrow, constricted to the hierarchies presented in the books. There seems to be no room for other spirits. By itself this is fine but it is another point in which I differ.
Fourth, I really dislike the word "demonolatry". It points out the weird love/hate relationship with Christianity that much of Satanic philosophy is built upon. It sounds like idolatry which is a word that I have only come across in the Abrahamic religions. It is the use of this word that contributes much of the air of immaturity about the philosophy, in my opinion.
So... some of my methods and philosophies could be described as demonolatrist in that I'm not treating these spirits as flat out enemies. Powerful? Yes. Dangerous? Potentially. Automatic enemy? No. Automatic friend? No.
I guess in many ways I'm still working on a definition of what I'm practicing, but Demonolatry is not it.
Posted by moonlit hermit at 10:40 AM 2 comments: