Today, October 17th, 2020, the Moon is in the Mansion Alcalb. Alcalb sits fully within the sign of Scorpio, from 8° 36' to 21° 25'. The image of this Mansion is a serpent with its tail above its head. The serpent, along with the eagle and the scorpion, is one of the traditional symbols of the sign of Scorpio. Its gesture, with its tail above its head, is similar to that of a scorpion and suggests an innately defensive posture.

The spirit of Alcalb is Egrebel. In its beneficial aspect Egrebel can be called to take away fevers and infirmities of the belly, to guard a house from serpents and hurtful beasts, to build buildings that are strong, and to free captives from incarceration. Or as Christopher Warnock states in his book, The Mansions of the Moon, to 'seize' poisons and render them ineffective. Certainly poisons are the province of both scorpions and serpents.

In its wrathful form Egrebel can be called upon to conspire against kings, to get vengeance upon enemies, and to separate friends. Again these have poisonous connotations but are used in offense.

The indicator star for this Mansion is Antares in the constellation Scorpio. 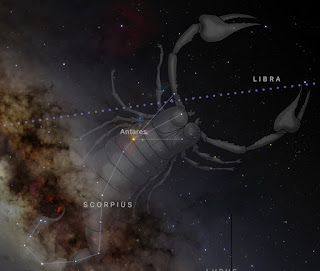 It is known as the Heart of the Scorpion. Its ruddy color puts it on par with the planet Mars in terms of effect. The name Antares could be interpreted as Ant-Ares, an alternative Ares as god of war (Mars). This is apparently how Ptolemy saw it. Mars is the traditional ruler of Scorpio.

According to R.H. Allen, in his Star Names and Their Meanings, Al Kalb was considered a fortunate Mansion. Offering defense against hidden dangers and the effects of poisons.

Together these elements suggest to me that the this Mansion is best suited to addressing or using poison in the sense of pervasive or systemic destruction, either in defense in the beneficial aspect or in offense in its wrathful aspect. The planet Mars would have an amplified effect, for good and for ill, aspecting the Moon when she is in this Mansion.

The symbol of water is strongly enforced in the connotations of this Mansion. Scorpio is a water sign and the undulating serpent has a fluid affect. Infirmities of the belly, presumably from something ingested, and the way poison spreads through the blood also reinforce the watery image of this Mansion.

Potential variations in the talismanic image of this Mansion clearly lie in the gesture and condition of the serpent. Is it attacking or is it defending? Is it hidden or is it plain? These decisions in composing the   image will be central to its effect in accordance with the intent of the talisman.

Posted by moonlit hermit at 5:14 PM No comments:

I Am An Imperfect Mage

This post is an ice breaker. It seems I have so many of these, mea culpas about neglecting some part of my practice and this blog, as I break through the intimidation of the blank page and the gulf of time from the last post. This post is really a way for me to absolve myself of the sin of sloth. I offer you this absolution too, if you need it. Let us not be stopped by lapses in ritual purity. Let us rise above the guilt of missed offerings and held back teachings. Let us gnash the gristle of the spirit world in our teeth and remember that it is not regular, it is not pretty, and my mouthful is different from your mouthful.

In spiritual pursuits there is no such thing as a waste of time.

Spirits are stirring, fires are burning.

Posted by moonlit hermit at 12:37 PM No comments: