To those of you who have been waiting I am please to let you know that the Picatrix Decan cards are back in stock on my Etsy page and ready for purchase. Check it out here: https://www.etsy.com/listing/601015785/picatrix-decans-card-deck. 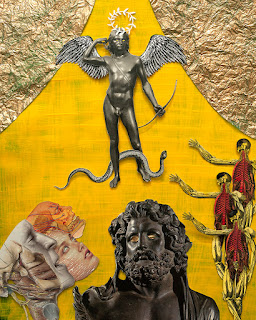 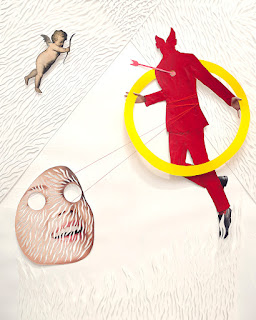 Posted by moonlit hermit at 10:38 PM No comments:

I am fascinated by the Egipcios Kier tarot and I think it is an interesting model of what a tarot or oracle deck can be. I have, however, had a hard time finding a thoughtful analysis of the symbolism found on each card. There is the Little White Book that came with the deck, written by Stuart R. Kaplan, but there is much that I find lacking about some of its suppositions and glosses. Plus, how in depth can one get in such limited space?

There is also the work of Nelise Carbonare Vieira on her website http://tarotdoor.com but that site is in Portugese, which I can’t read. Google translate is great but I am sure there is plenty that I am missing in the proverbial and literal translation. She also seems to have her own system of understanding the deck that I’m not sure I fully understand or agree with.

I would like to begin to do my own analysis and research on this important tool. This project will give me a good reason to do some of the more detailed research in Egyptian mythology and the use of symbolism found on each card. I have been using this deck for a few years and have come to have insights and intuitive leaps regarding the meanings of the individual cards. You may like that and you may not. But in the absence of voices on the subject, I would like to try to add my own to the body of knowledge. Essentially I am self-taught in the use of this deck and I would like to use this forum to explore it more deeply.

Let’s explore together. As always your thoughts are welcome. 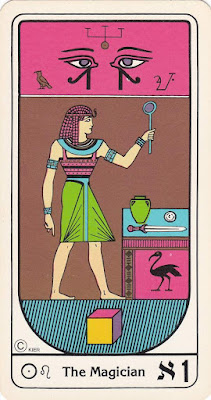 The Magician is the first card of the Egipcios Kier tarot and therefore has an especially important part to play. The fact that the deck is numbered 1 through 78 without separation of suits or court cards suggests to me that the sequence is important and that there is at least the connotation of a continuum or cycle. That there is the semblance of cycles in a tarot deck based in ancient Egyptian mythology should not be surprising.

At the top of the card we have the sigil of the Solar spirit Och from the Arbatel. This is the first of the solar symbols on this card. The Arbatel says of Och that he...

"governeth solar things; he giveth 600 yeares, with perfect health; he bestoweth great wisdom, giveth the most excellent Spirits, teacheth perfect Medicines: he converteth all things into most pure gold and precious stones: he giveth gold, and a purse springing with gold. He that is dignified with his Character, he maketh him to be worshipped as a Deity, by the Kings of the whole world."

The bottom, terminal end of the Och sigil has astrological symbol of the Sun incorporated into it. I am not familiar with this little detail and this example is the first I've come across it. The Sun symbol at the bottom of the Och sigil falls between two eyes, right about where the Third Eye would be located. These two eyes are the Eye of Ra and the Eye of Horus, dieties in their own right and parts of the god Ra. On one level the eyes represent the Sun and the Moon, respectively. They are the consciousness of Ra. It is through our own consciousness that we can become aligned with the gods and thereby they become a symbol of the magician assuming the mantle of godhood through consciousness.

To the left of the eyes is the Egyptian hieroglyph of a kite which E.A.W. Budge lists first in his hieroglyphic dictionary as the sound of the letter A. It is for this reason that it is used on this card.

To the right of the eyes we have the letter A given in what is called the Alphabet of the Magi. The Alphabet of the Magi dates back to the 16th Century in Italy and was used in the construction of talismans. It was purported to have been transmitted by angelic spirits. Here again it is for the attributes of the letter A as the beginning of the alphabet that it is included.

In the middle register we have the image of the Magician. He is in an active posture, with one foot in front of the other. On his head is a circlet crown with a cobra ureas serpent on his brow. His hair is a plaited wig. His wealth is signified by his jewelry; lapis bands on his arms and wrists, a large, lapis pectoral ornament around his neck. In his raised left hand he holds a mirror with a wand handle. The tilt of his eyes suggest he's looking into the mirror. His right hand is low, at his side, and he points down toward the ground. He is wearing a stiff skirt that appears to be bound with a lapis belt. In front of him is a cube shaped altar. On the side of the altar is the figure of a ibis bird, the bird sacred to Thoth, the Magician of the Gods. The edge of the altar is delineated by two bands that meet at a right angle. The top of the altar has three objects on it, a sword, a jar, and a coin. With the wand in the Magician's hand these represent the tools of the Magician and the four elements. Bellow the Magician, obscured in hashmarks of darkness, is an isometric drawing of a cube. This is a foundation stone of the universe.

One of the predominant meanings of this card is consciousness and awareness. Being the first card in the deck it also has connotations of waking up or first becoming conscious. This consciousness has qualities of being self-aware. The Magician, as he gazes into his mirror wand, points to the ground as if to say, "I am the real one over on this side of the mirror," (but of course the image is doing the same thing). With self-awareness comes mastery. With consciousness comes the ability to identify with other consciousnesses, including the all powerful gods. This is indicated by the Eye of Ra and the Eye of Horus at the top of the card.

Solar iconography is often about self and identification. This is why the Sun sign is often what people refer to as "their" sign. The Sun is symbolic of the self. Carl Jung wrote that the astrological symbol of the Sun, a circle with a dot in the middle, is a graphic representation of the self. Here the identification of the Magician to the Sun is more explicit. Egyptian mythology is a solar theology. The goal of the aspirant was to be able to die, traverse the Underworld, and be reborn just as the Sun does each day.

In traditional European astrology the Sun is the king of the planets and controls their disposition through their waxing and waning phases. The Sun keeps time and dictates the seasons. The Sun has dominion over the entire universe.

The Egipcios Kier tarot represents a journey through the Underworld and begins with the Magician, as master of himself and his world, taking up his wand and gathering his tools to walk the path. He is full of energy and backed by the will of the gods.

Posted by moonlit hermit at 11:31 AM No comments:

Oh, this poor neglected little blog. It has been nearly a year since I've posted to it. Too long. But if you were to look back and read all the posts you'd see this is a common occurrence. Gaps abound in my journals. In fact this is really the reason I started this blog in the first place. I know myself well enough to know that I respond well to pressure from an expectant audience. I knew that if I had a deadline, no matter how artificial it was, I would step up.

At any rate, I had someone asking me a few days ago about this blog. I lamented that I had been so neglectful. "Ach!," I wrote, "what a slacker." I asked them what I should write about. They suggested I write about balancing the elements of life, mundane and magical, and about periods of being a slacker. I've written about this idea before but perhaps it is time for a reexamination, if for nothing else than to break the ice and get back into the swing of not only writing on the blog but also my greater practice.

One of the great lessons of the material existence is all things move in cycles; birth, growth, death, decay, birth. When one is in the death and decay stages of whatever cycle they're in it is hard to do much. Depression and despair are at once the exact situations for which magic would be a help and the very conditions in which it is almost impossible to do any kind of magic. Or at least it was for me. In a very real way I met my shadow over the course of the past couple of years and it wrestled me to the ground. The obstacles in my path were entirely of my own making and really were only obstacles because of my dogged determination that everything must turn out in exactly one way. Who knows how many opportunities I missed just because I was blindly following a plan that turned out to be futile. My strategy was flawed from the beginning and I wound up working harder and harder for no gain to the detriment of almost everything else in my life. I dropped my magic practice, avoided people, wouldn't allow myself anything pleasurable, and the work I loved was becoming something I was coming to resent. So I quit that job and got a regular one. That's where I've been for the pat several months.

So, why do I tell you all this? Partly just to vent but I also think there is a lesson to learn from this.
Did I fail magic?
An argument can be made either way. Did I fail magic? Yes. I should have been more prepared with divination to identify and find solutions to the pitfalls that were about to be in my way. I could have marshalled spiritual forces to my advantage.
Did I fail at magic? No. Even the most powerful of mages cannot escape the challenges of a mundane life. Perhaps my experience could have been much worse and was ameliorated by the spiritual authority I have built up over the years.

I find limited value in this second guessing and questioning my decisions long after the fact. What I can say for sure, however, is that panic and desperation kill my ability to do magic of almost any kind. My divinations become skewed, my offerings turn into childish begging for favors, and my shadow rises up to tell me that I am unworthy for happiness or success.

I am definitely coming through the other side of this experience. The stability that comes from not stressing constantly about how to pay my bills helps immensely. Some projects that I've had on the proverbial back burner are catching my interest once again. It reminds me that my practice has always ebbed and flowed. I look forward to doing more,experiencing more, and sharing more.

Posted by moonlit hermit at 5:14 PM No comments: