As I write this the Moon is in Albelda, the Lunar Mansion at the end of Sagittarius. It is a Mansion characterized by transitions, hard stops, and open space. The influence of Albelda was apparent to me before the Moon was in it in the tropical zodiac. Currently, I am traveling abroad with a family group of six. One of our members became seriously ill and I caught a cold. Even while the Moon was still in Alnaym we had a hard ending to our itinerary to seek medical attention for our companion. In comparison my cold was a minor, if gross and full of mucus, inconvenience. And now, here I sit with the rest of my party waiting under the pretext of relaxing, to hear how they are doing and recovering from my own illness.

I have seen Albelda described as the District, the City, and the Area. But I think my favorite translation is how Amina Inoles characterizes it in her translation of the Shams al Ma’arif as the Wasteland. It occupies a bit of sky in which there are few visible stars on the ecliptic and was considered an open space. For this reason, the Wasteland seems an apt name for this Mansion. Its image in the Picatrix is a Janiform man, that is, a man with a face both on the front and on the back of his head, and its talismanic power was to depopulate and devastate an area or a city. 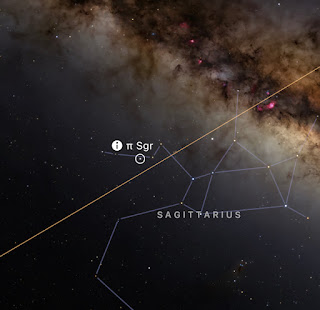 In ancient Rome Janus was a god of thresholds, marking the end of one state and the beginning of another. The month of January is named after Janus and it occurrence marks the beginning of a new year. Janus would reportedly be invoked to mark the beginning of religious ceremonies or the formal declaration of war. To pass Janus’s doorway was to never go back.

This implication of abrupt change was certainly my experience during my travels. The remainder of this trip will not be as I had originally planned it. In terms of its place among the Lunar Mansions Albelda sits just before the series of “lucky” stars and so marks another threshold. Part of me wonders if, long, long ago, Albelda was the beginning of the Mansions. It would be appropriate, just as in the calendar of months, to begin with Janus. But I haven’t done the math to see just how many thousands of years back we would have to go to account for procession so this may be idle musing.

Part of the symbolism of the doorway is its sense of in-betweenness, the state of not this any longer but not that yet either. There is a moment, even if infinitesimally brief, of stillness; a pause between inhalation and exhalation, the floating feeling as the rollercoaster cart reaches the apex of a crest just before gravity pulls it down the other side. And as I continue to wait here this aspect of the symbol of Albelda is thrown in high relief. Albelda is a rest between the hunting in Alnaym and the sacrifice of Sadahaca. It is the breath before the ritual begins.

And so, I accept my forced downtime, even as I feel a slight frustration at not being able to explore.

Posted by moonlit hermit at 9:30 AM