In the Moonlit Hermit Tarot deck there are four cards that are supplementary to a classic tarot deck. These four cards were added as a reward in the Kickstarter campaign and make the Moonlit Hermit Tarot an 82 card deck. Here I will talk about the inspiration behind making them and offer some ideas about how they can be interpreted in a tarot reading.

First off, I feel I should say that this essay is meant simply as a set of suggestions. The four supplement cards are unlabeled and therefore can take on whatever meaning the reader chooses. If the ideas in this essay don't resonate with you feel free to discard them.

Echoes of goetic spirit magic pervade the Moonlit Hermit Tarot. For instance, the hem of the angel in the Temperance card is the "dancing" sigil of the spirit Klepoth from the Grimorium Verum. The four unlabeled spirit cards originally were representations of a set of spirits called the Four Kings. The concept of the Four Kings exists in several cultures and spiritual cosmologies all over the world. The concept is also prominent in the rituals of the medieval European grimoires. In a nutshell, each of the Four Kings is thought to have dominion over spirits that originate in or have their home in the cardinal direction associated with that King. It is not uncommon to invoke the Four Kings in a ritual context as a way of empowering the magician and claiming authority over spirits in their name.

As is often the case with spirits in sets of four there is a tendency to attribute them to each of the four classic elements; fire, water, air, and earth. Therefore each King has an association with a cardinal direction as well as an element. If one compares traditions one quickly learns there is no one, standard way to associate a King to a specific direction or element. Also the names of the Kings have gone through changes over the years. This was one of the big factors that suggested I should leave these cards unlabeled.

In terms of divinatory meaning in the deck the Directional Kings denote the spiritual realm and the actions of spirits. In this context "spirit" is very general and may refer to deities, angels, demons, daemons, nature spirits, elemental spirits, or spirits of the dead.

First up we have the King of the East. 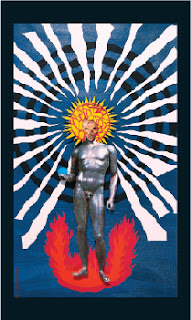 The King of the East rules over the horizon from which all heavenly bodies rise from the Underworld to take their journey across the sky toward the west. It is the ascendant of the zodiacal wheel and is a position of empowerment of astrological spirits. It can represent any of the spirits associated with the Morning Star, Lucifer not least among them, and so a certain amount of dominion over spirits in general. The King of the East is associated with light and the element of fire.
In our image a figure with a dark yet brilliantly shining body stands among red flames. His pose is at ease. In his right hand he holds out a blue sphere. His head is shaped like a flame and behind it is a halo like a bright yellow sun shining through a red lattice. From the halo extend white shafts of light separating the figure from a blue field and black concentric circles of darkness.
In divination this card can mean the awareness of or revealing of spirits, spiritual vision, and spiritual authority. It can also indicate spiritual beginnings or the granting of boons or wishes. Power is increasing with this card. It is an active card.
Next is the King of the South 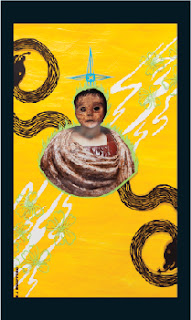 In terms of the wheel of heaven, south is one of the axis poles on which the heavens turn. The King of the South rules the element of air. This card is active and can indicate the movement and action of spirits or spiritual transitions in general.
In divination this card can represent the higher, etherial spiritual realms. There is also a bit of a dual nature to this card. Behind the figure, from the upper right to the lower left are delicate green flowers floating on irregular white lines of motion. This is a sweet fragrance carried on a gentle breeze. Conversely, from the upper left to the lower right, two writhing black dragons with tongues like barbed darts curl about themselves. This is a plague wind and spirits who strike on the air. Therefore, in some contexts, this card can indicate a blessing in disguise or a trap hidden in a boon.
Next is the King of the West. 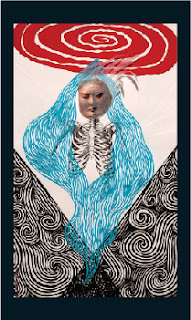 West is the direction of the setting sun and the entrance to the Underworld for heavenly bodies. It has connotations of Water is the element ruled by the King of the West. It indicates hidden things and things just out of perception, like objects at the bottom of the ocean. This card has connotations of veils, surfaces, and membranes covering unknowable depths.
Above the head of the spirit is a red and white swirl, the surface of a pool of blood, and through the symbolism of flowing blood this card has connotations of ancestors and family bloodlines. The spirit's face is obscured with a translucent veil that drifts away in wisps. The spirit parts a blue shape that suggests flowing water, which is set between the split of two black, angled shapes filled with swirls. These images remind us that veils may be parted, membranes may be pierced, and hidden things may yet be revealed.
Lastly is the King of the North. 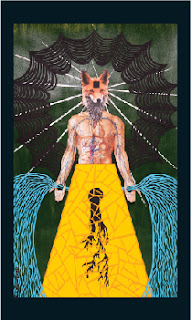 The King of the North is associated with the element of earth. It can indicate spirits of a place, the nourishing aspects of a spiritualized earth, and the spiritual consciousness that pervades all things in the view of the animist.
In the Northern Hemisphere the stars in the northern part of the sky never set and so the north has connotations of permanence and stability. This is indicated by the truncated pyramidal form of the lower part of the spirit's body. The pyramid is composed of a lattice structure. It has at its center a long black shape that terminates in root-like reticulations. The spirit's torso resembles a man's with a view of the circulatory system. From his outstretched hands torrents of water flow.
Foxes have an internal sense of the magnetism of the planet and can innately align themselves with the north and south poles of the Earth. For this reason our spirit has a fox's head. On its brow, a black square, one of the symbols of an earthy Saturn. From behind the spirit's head emanates thin white rays of light that shine from behind concentric webs of darkness. This represents the divine spark in the dross and obscurity of physical matter.
****
This is where my thinking is on these cards at the moment. As time goes on, and I and others use the deck more, new meanings and nuances will emerge. Being at this point intuitive cards the spirits themselves will have more say than I do.
More information on the Four Kings can be found in multiple sources. H.C. Agrippa's Three Books of Occult Philosophy, in Book 2, Chapter 9, The Scale of Four, mentions these kings but gives a slightly different directional attribution to them than I have given above. If I were to have labeled these cards in the deck with the spirit names it would have been Oriens in the East (the blue one), Amaymon in the South (the yellow one), Paymon in the West (the white one), and Egyn in the North (the green one). I fully acknowledge that others use different attributions and so I stand by my decision to leave these cards unlabeled to give them maximum latitude and versatility.

Posted by moonlit hermit at 2:06 PM